A Little About  Taiko

Taiko (太鼓) is the Japanese word for large drum. Taiko originates in Japan but is now played in other parts of the world such as  Asia, America, Europe och Australia.

Taiko began as an art form with Daihachi Oguchi [1924-2008], who founded the Osuwa Daiko in 1953. Another pioneering group was Yushima Tenjin Sukeroku Daiko, which was founded in the 1960s, and this group laid the foundation for what we today call kumi-daiko. Kumi-daiko has it's traditional roots in Gagaku (imperial court music from the 7th century), Kabuki dance drama, Noh drama and Japanese festival drumming.

Taiko has not only spread geographically over the years, but has expanded artistically as well, from traditional festival drumming, to creating new styles of taiko and collaboration with other musical forms. 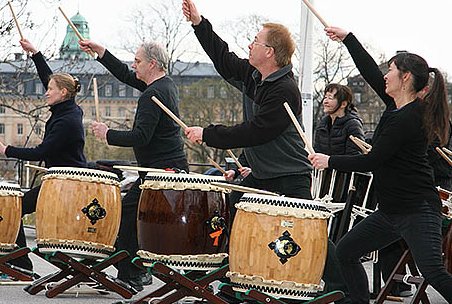